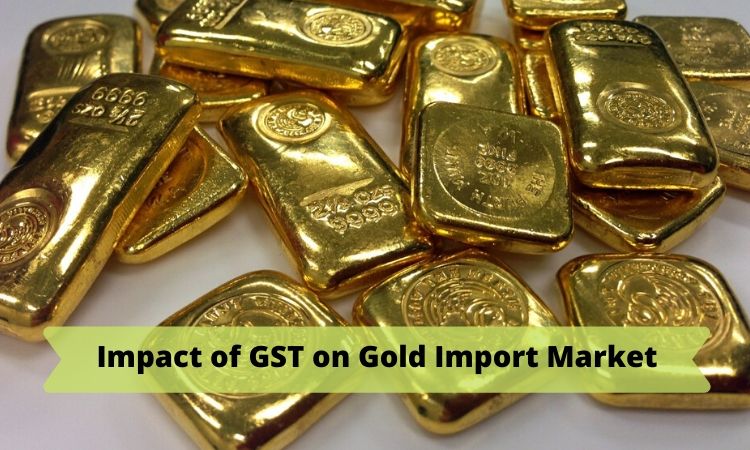 GST, or Goods and Services Tax, was implemented back in 2017 under the ‘One Nation One Tax’ agenda of the Indian government. This tax brings under its ambit all goods and services, replacing multiple indirect taxes. The uniformity offered by this indirect taxation system also extends to the nation’s gold market.

Presently, GST on gold is levied at a rate of 3% in India. As most of this precious metal is imported in the country, gold traders have to pay this tax on the sale of gold over and above applicable import duty.

However, as suggested by experts, the overall impact of this taxation at 3% GST rates in India is expected to force traders to move to the organised sector. As a result, the Indian economy, as well as gold buyers, can benefit from this change.

Before moving on to the impact of GST on gold import market, have a look at the overall impact of this tax on gold traders.

Taxation on gold – The old and new

In the older tax regime before the implementation of GST on gold, taxes levied on sale and purchase of this precious metal as well as on making charges of gold jewellery were as follows.

A small percentage, along with leniency in regulations, allowed the unorganised gold market to flourish. However, these were among the taxes that GST replaced and proved beneficial.

Contrastingly, implementation of GST at 3% has not only increased tax burden on gold but also mandates the submission of documents required for GST registration. Gold traders are thus required to generate GSTIN after registration and making GST payment in time.

An increase in GST also increased the price of gold by up to 0.75%, which is also one of the ways GST affects gold jewellery.

Impact of GST on the gold import market

As import duty on gold increased to 10% from 6%, purchase volume of this precious metal dropped in the organised market. However, GST on gold brought back this balance and traders were moved to operate in the regulated market due to compliance issues.

Notwithstanding, import of gold in India from countries like South Korea increased again due to relaxed regulations of the Free Trade Agreement. As per media reports, traders sought to import up to 25 tonnes of gold from South Korea alone after GST implementation. Experts also suggest this rise as one of the advantages of GST.

The tax implementation has affected the gold import market differently for organised and unorganised sectors. Have a look at the two.

As only 30% of the total market for gold is organised, it is easier to regulate this segment for GST adherence. Traders in the industry can easily complete the procedure of how to file GST return, ensuring the taxation requirements are met.

Increased taxation also bears a risk of gold being smuggled in India in higher volume, which is a concern and expected to be the latest impact of GST.

While these were the influences, knowing what is GST for gold and complying with taxation requirements is in the best interest for both gold traders and the country’s economy.

To make up for any fund shortages during trade operations, gold traders can avail Business Loans at competitive interest rates from the likes of lenders such as Bajaj Finserv.

View all posts by Rishabh Agarwal →