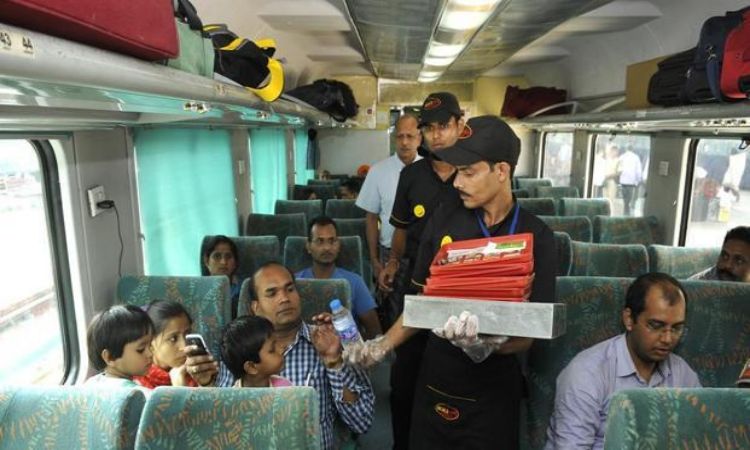 If you’re worried about eating meals on trains because of the quality, there is nothing to fret about because there are a few measures that Indian Railways and Tourism Corporation has taken to ensure that you get good quality and hygienic food.

In 2017, a new catering policy was issued under which IRCTC was given the task or rather was mandated to carry on good catering service by creation a mark that separated the distribution of food from the preparation of food on trains.

Given that policy, a number of kitchen units- 46 to be exact have been upgraded by IRCTC ensuring quality food is made in Indian Railways trains and stations both.

More so, CCTV cameras have been installed in almost all the upgraded kitchen units. To make sure the passengers are not apprehensive about the food, IRCTC website constantly keeps sharing live streams of the kitchen units- showing the preparation on the food, its packing and distribution.

FSSAI, The Food Safety and Standards Authority of India’s certificate for each catering unit given by the responsible food safety officer is mandatory now, to ensure that Indian Railways is adhering to the safety and food norms of serving Food in Train.

Everything is so well backed because hygiene is a primary concern. To make sure that food safety is paramount, food safety supervisors have been deployed at Kitchen Units. They collect the food samples and then send it for proper testing and analysis to the chosen laboratories that have been accredited with this work, under the Food Safety and Standard Act.

In case the food is unsatisfactory, (which can be found out after the samples are explored) heavy penalties are imposed. A third party audit reviews the quality of the food being made, how clean the entire place is and if hygiene is being maintained in kitchen units and pantry carts.

Not only that, the customer is always kept at the forefront. A customer satisfaction survey is done by third party sources. Regular surprise inspections are conducted by railway officials to make sure that there whatever the public is eating is hygienic.

An interesting system where details of the packaging, the name of the kitchen and the QR code are there on food packets has been implemented by the railways.

A list of meals known as RTE or ready to eat has also been introduced for hungry passengers on trains. The constant supervision and monitoring of the catering services is done by a centralized catering service monitoring unit that operates via a toll free number, email, SMS and also twitter.

The Rail Minister assures that providing good quality and hygienic food is their paramount concern for passengers. There is now an institutionalized mechanism through which hygiene is maintained and nothing is sold above the MRP. Regular inspection assures this to the general public. Not just that, Indian Railways as also launched a campaign by the name of ‘No Bill- The Food is for free’ which ensures that every passenger will get a bill with the food item.