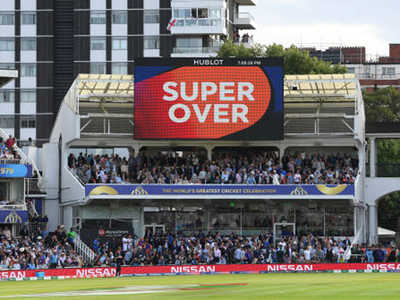 Result of the matches turned into tie is not a new thing in cricket. First ever International match resulted into tie in 1960, where Australia met West Indies at Brisbane in test. There are only 2 tie test matches, but more in limited over cricket.

There are just 2 Tie matches out of 2379 test matches (0.084%), which are already completed. So, the percentages of getting result as tie in test matches are extremely less. But comparatively, there are many number of tie matches in limited overs, 38 ODIs out of 4223 (0.8998%). That is more than 10 times than test cricket, and 16 T20I out of 1025 (1.561), which is almost twice of ODIs. Though, the percentages are not that higher, but due to the competitive cricket, the solution needed to be found to find a winner in the tie matches.

Out of 38 ODIs, there were 5 deciding matches. And out of those 5, there were just 2 matches in the ODI WC. One is 1999 semi-final between South Africa and Australia, and the second one was recent one in WC 2019, Final between New Zealand and England. Luckily, there was no such instance in T20Is.

When the WT20 (T20I World Cup) was announced, Bowl out solution was used for finding winner in tie matches in t20Is. In which, both the teams needed to bowl by five different bowlers. The team, who hit the stumps higher number of times, would be getting points for the match. The rule was used only one time in WT20 in 2007 between India and Pakistan, and couple of times in other matches.

After that, the rule was changed from bowl out to super over, but the rule was limited to T20Is only and not for ODIs. The super over rule was used many times and twice in WT20 (T20 World Cup). Both instances were in WT20 2012, which was played in Sri Lanka, interestingly, in both the matches, New Zealand was a common team and both times Kiwis (New Zealand) lost the matches.

The rule was first time introduced in ODIs in WC 2019. Before that, there were different rules, like NRR rules in league matches and the team would progress according to the result of the head to head in the tournament, which happened in WC 1999 semi-final, where tie occurred between South Africa and Australia, but in the super six stage, Australia beat South Africa and so, Australia progressed to final, and eventually lifted the cup.

But in WC2019, the tie happened in the final match of the tournament, and the rule was announced prior to the beginning of the tournament, so both the teams needed to play super over and interestingly, the super over also resulted into tie. The rule was also announced in such rare case, and that was, the team, which hit higher number of boundaries, would be declared as winner, and due to that, England team lifted the world cup, but the rule needed to face many criticism.

One more change in the rule:

Finally, the boundary rule is removed and new rule is going to apply, and it is decided, in the league round matches will have just one super over, and if it will be tied then the match result will be counted as tie only, but in knockout stage, the super over will be continued to play till the winner will be decided. The rule will be applied in both WT20 as well as ODI world cup tournaments.

Certain things will be still out of control, like weather,

Umpire decision review system is also added in today’s competitive sports to be precise about umpire’s decisions. There is one technology, which is used for the review purpose, called Hot Spot, to check whether the ball touches bat first or pad, in short, it helps to check where does ball exactly touch?

So Hot spot can be used to see the control percentage of the batting team and bowling team, and tied matches could be concluded through comparing the control percentage, example, points could be given to batting team about getting run through middle of the bat, and not just getting runs like top or bottom or inner or outer edges, also the points would be given to the bowling team for the control over bowling, like wicket to wicket bowling or wicket through LBW and Bowled might be given more points, and wicket through bouncer could get less point or decrease points, as sometimes batman tries to save him/her self and lose his/her wicket, and same for fielding as well, like diving catches could provide more points.

This comparison will not only used in tie matches but also in ‘No Result’ matches as both the team will have play the similar cricket. Like those many balls bowlers bowl and only those many balls batsmen will have to play, but the comparison will be between their playing cricket, example, in the ‘NR’ matches the comparison could be between control over number of balls, like how much bowling team could control the balls and how much the batting team could control through bat.

This system might require some technical people (in cricket only) to create point system, but on the positive side, there will be sure shot result in terms of differentiation, of course not result in terms of victory or loss, whether it could be league match or knockouts. This could help in knockouts, when the circumstances will not permit for getting sure shot result. Example, after playing 4 to 5 super overs, though, chances are extremely rare. This could help in the league rounds as well, in case of tied super over, which means the result will be definitely tied, but the technicality comparison could provide the “technical points”, which might help to choose top four out of all the teams of the tournaments, though the technical point system might have least priority.

The Technical point will also pressurize the teams to play more technical cricket and not looking for just getting runs or completing the overs.

Moreover, This point system might bring more audience to watch more cricket techniques. As well as, team would prefer to bowl less bouncer due to getting less technical points. Except it, it is very difficult to restrict bowlers to bowl bouncers.