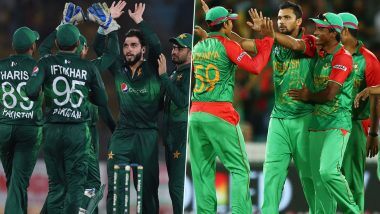 Pakistan and Bangladesh are going to play the first T20I of the T20I series of three matches at Gaddafi stadium at Lahore.

The series is going to be the second bilateral series only, in Pakistan, and forth series between the teams. Two series were won by Pakistan and one by Bangladesh. Although, all the series contained only one-off match, but this time the series contains three T20s.

Both teams faced each other 10 times, already, where Pakistan won 8 and the other team won remaining.

Weather looks pretty clear, as well the temperature would be pretty normal,  and precipitation percentage would be nil, as of now. Teams prefer to chose according to the pitch, after winning the toss, out of 9 times, teams preferred to chose batting 5 times and fielding 4 times. The successful chase was 176 runs, on the other hand, lowest defendable score at the venue was 147, which was also the lowest first inning score, which was in the last match. Teams, who won the toss, won match only twice, and lost remaining times. Teams, with the batted first, won the match 6 times and thrice for the fielded first.

Both the teams never played any match at the venue.

The home team has average record with played 9 matches at the venue, where the team won 5 times and defeated 4 times.

Bangladesh: The visitors also would like to go with the experience team for the first match. The team might prefer three pacers with three spin all-rounders, whereas visitors have provision of one batting all-rounder and one medium pace part timer, as well.