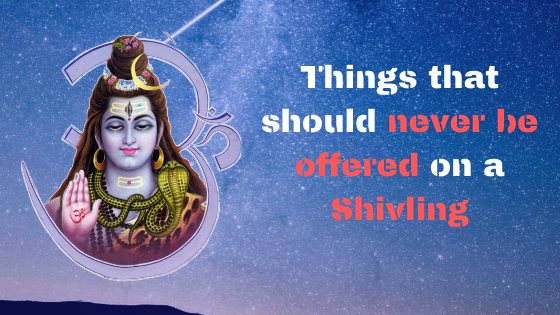 Lord Shiva epitomises calmness. His idols or images portray Him serene, mostly in a meditative mode. However, He can get extremely angry if He is displeased by something. His Rudra form is the dangerous Shiva and proof of what happens when the Lord is irked beyond a point.

Devotees of Lord Shiva worship the Shivling on the special day of Mahashivratri by performing Abhishekham (sacred bathing) and offering certain things on the Shivling, which is an abstract representation of Lord Shiva.

Also, many devotees of the Lord worship by performing Abhishekham on a daily basis and on Mondays, which is Lord Shiva’s day.

Lord Shiva is benevolent in His blessings and He is called Bholenath because of His easy, innocent qualities. It is said that it is very easy to please Bholenath/Lord Shiva by simple offerings and pure intension of prayers.

The worship of the Shivling has certain rules and rituals which have been followed by devotees of Lord Shiva since ages. As far as offerings are concerned, there are a few things which are forbidden to be offered on a Shivling, as specified in the Shivpuran.

1) Tulsi Leaves – Lord Vishnu is offered Tulsi leaves as it pleases Him. But Tulsi leaves should not be offered on Shivling or to Lord Shiva. The story is about Jalandhar and his wife Vrinda.

Jalandhar was a demon who created havoc in the world of Gods and Rishis (Sages). Vrinda was a pious, chaste wife, completely dedicated to Jalandhar. She was an ardent devotee of Lord Vishnu and religiously prayed to Vishnujee to protect her husband from all danger.

Jalandhar also had been blessed with a boon which depended on his wife’s chastity. Because of this reason, Gods could not kill Jalandhar. When Jalandhar’s brutality went beyond limits, Lord Shiva was asked to help with a solution.

Lord Shiva and Lord Vishnu conspired against Jalandhar and Vrinda. Lord Shiva engaged in a war with Jalandhar. On the other hand, though Lord Vishnu felt bad about His devotee, Vrinda, but carried out His part of the plan.

He took the physical appearance of Jalandhar and went to Vrinda, who on touching Him, immediately came to know that it was not her husband. Vrinda’s chastity was broken.

She demanded to see who it was in the form of Jalandhar. Lord Vishnu revealed His divine form.  Upset, hurt, betrayed by Lord Vishnu, Vrinda cursed Him to turn into stone for breaking her virtue. Lord Vishnu gave a boon to Vrinda to be reborn as Tulsi.

On the other hand, Jalandhar was killed by Lord Shiva in the war. This news shocked Vrinda and she forbade that no part of her should ever be ever used in worship Lord Shiva. So the Tulsi leaves are never offered on the Shivling.

2)  Haldi (Turmeric) – Devotees offer Turmeric powder to deities. As Turmeric is a ‘beauty enhancer’ which means, females use Haldi paste pack, to enhance the beauty of the skin also it’s a feminine thing more appropriate to be offered to Devi Parvati.

Lord Shiva is considered to be simple, a Yogi, who is not affiliated with worldly attachments and pleasures, therefore, Turmeric or Haldi which is a natural beauty product is a luxury and feminine, is prohibited from being offered on the Shivling.

3) Kumkum – The Kumkum also known as Sindoor is considered sacred and worn by married Hindu women for the long life of their husbands.

Rather Lord Shiva is fond of the Bhasm(ash) and we see three streaks of horizontal lines of Bhasm on His forehead.

4) Ketki flower – Legend has it that Ketki flower was cursed by Lord Shiva. Lord Vishnu and Lord Brahma were in a war with each other to prove the supremacy of power over one another. Lord Shiva intervened and appeared in the form of a flaming pillar.

He asked Lord Vishnu and Lord Brahma to find out the top and bottom of this flaming pillar. Vishnujee went in search to find where the pillar ended and Brahmajee went upwards to find the start of the flame. Lord Vishnu failed to find the end and accepted defeat.

Ketki flower did as was agreed with Lord Brahma but Lord Shiva caught the lie and cursed Ketki flower to never be used for the worship of Lord Shiva.

6) Steel vessel as Jal Dhara – A Shivling should always have a continuous jal dhara (dripping water) on top of the Shivling else it will attract negative energies. The vessel holding the water for the jal dhara should not be made of steel.

Though Lord Shiva is ever-loving and forgiving and blesses His devotees, it is better to remember what not to offer on the Shivling. Worshipping the Shivling with what pleases the Lord on Mahashivratri 2020 or on any other day, will help to garner His benevolent blessings.