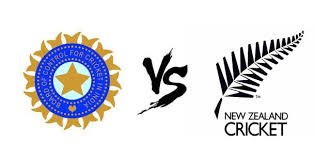 First test match of test series of two matches between New Zealand and India is going to be played at Basin Reserve, Wellington.

This is 21st test series between the teams, and visitors’ 10th visit of the country for the test series. Out of 20 test series, India has upper hand, as the team won 11 series, and New Zealand won 5 of them. 4 Series were resulted into draw, and the last one was in 2003-04, when New Zealand visited India.

On the soil of New Zealand, India’s record is not much impressive, as the team won the series only twice. The first ever played and the second one, after 42 years of the first series victory. Whereas, the host record is pretty good and won 5 series with two were draw.

Overall, the teams met each other on 58 occasions. India won 21 matches, whereas, new Zealand won only 10 matches, and 26 were resulted in draw. One match was abandoned without toss.

When India visited New Zealand, the teams played 24 tests, and the visitors won only 5 tests. On the other hand, the host won 8 tests. 10 out of remaining 11 were resulted into draw.

The visitors’ initial record was pretty good and won 4 out of first 5 tests, After that the visitor won the test after 14 test matches and 33 years. Now, the streak of without any win is 4 for the visitors.

The contest is between the first rank team and forth rank, though, India will not lose the position, even in case of two-nil defeat, but will lose the point. On the other hand, New Zealand has chance to improve team’s position, even the team will improve their position in case of draw. Series victory will bring the team on the second position.

If India wants to increase the points in point table, then the team needs to win the series, and same for the host, as well.

Moreover, the series is the part of ICC World Test Championship, as well, the first series in New Zealand of ICC World test championship. Due to the series, is of 2 test matches, every match contains 60 points for win, 30 points for tie and 20 points for draw. Teams will not lose any pointing in case of defeat. So the teams aim to win the match. India didn’t lose any test of ICC World Test championship 2019-21, but the team never won more than a match in the test series, since 1967-68, when touring New Zealand. On the other hand, New Zealand won only 1 test out of 5, though the team didn’t play any test of the championship at home, and the upcoming test will the first one for the host at home.

Weather forecast of the Wellington shows the weather would be windy and mostly cloudy for the first day the match, partly cloudy on day second and third and mostly sunny on last two days. But no rain would be expected, as the precipitation percentage would be very low. The temperature would be nearly 20 degree Celsius.

The lowest defended total was 137, though, it happened in 1978, and the highest successful chase was 277 runs on the venue in 2003. On the ground, the teams chased down the target 18 times and lost only 6 times. Interestingly, there were 15 test victory with an inning.

Both the teams faced each other on the venue 7 times, and the visitors won just one match and faced the defeat in 4 meetings. The remaining two were resulted into draw. India never won a match since last 52 years. New Zealand’s last victory against India was in 2002.

The home side has below average record at the venue, and won 19 matches out of 63 encounters and lost 20 matches with 24 matches resulted into draw. Interestingly, The host won first ever test match on the venue in their 11th attempt. Surprisingly, After the first victory, the team had undefeated streak of 18 matches and 26 years.

Fast bowlers would get benefits due to wind excepted on third and forth day as per forecast. So, home side would prefer to have fast bowler. The team would either include only spinner of the squad, but chances for K. Jamieson’s debut as well.