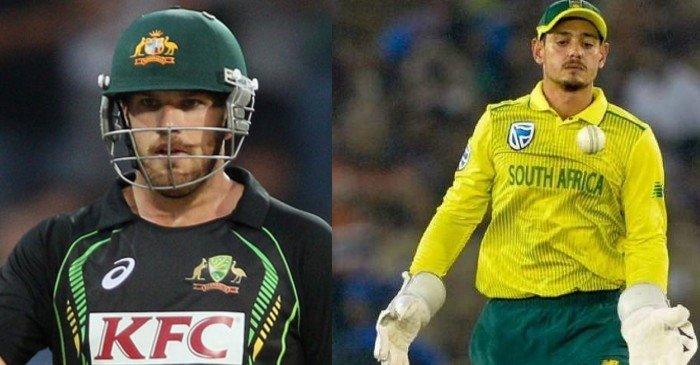 First meeting of the series of three T20I matches between South Africa and Australia is going to be played at The Wanderers Stadium, Johannesburg.

This is 10th T20I series between the teams, and visitors’ 6th visit of the country for the T20I series. Out of 9 series, Australia has upper hand, as the team won 5 series, and South Africa won 3 of them. 1 Series was resulted into draw.

On the soil of South Africa, Australia’s record looks improved, though, the team won the series twice, and lost same times, but, last time, visitors lost the series in 2008-09. The team won last two consecutive series in the country.

Overall, the teams met each other on 19 occasions. Australia won 11 matches, whereas, South Africa won only 7 matches, and 1 was abandoned.

When Australia visited South Africa, the teams played 11 matches, and the visitors won 5 times, and same for the host.

The Interesting fact was between Jan 2009 to Nov 2018, the teams played 11 matches and the second batting team never lost any match.

The contest is between the second rank team and fifth rank, though, Australia has chance to become top ranker team in T20 point table first time, the team never be on the top, yet. If the team wants to be on the top, then the team needs to win the series by two-nil or three-nil.

The host has nothing to lose, in case of series defeat without any win. But the team could improve their position with winning matches and the series.

Result of the first match will not bother host’s current position, and same for visitor, if the team will win, but if the visitor will lose, then the team will lose the position.

Weather forecast of the Johannesburg shows the isolated thunder storm in Johannesburg, which may disturb the match, and DLS would be used to get the result. The weather would be mostly cloudy throughout the play. Rain would be expected, as the precipitation percentage would be high. The temperature would be in 20s, and wind would be pretty normal.

Particularly, for South Africa, the team won the toss 11 times out of 20 times, but the team won 7 times and lost only 4 times.

Moreover, the host never lost a match against Australia after winning toss.

Batting average of the first inning at the ground is 25.54 and 25.81 for the second inning.

Both the teams faced each other on the venue 4 times, and the visitors won just one match and faced the defeat in 3 meetings. The visiting team got a chance to play one more match with other opponent and lost it as well.

The home side has pretty good record at the venue, and won 13 matches out of 20 encounters and lost just 7 matches. Though, the team lost 4 matches in 7 recent matches.

The host would prefer to have fast bowlers on the run-fest pitch.

The visitors would also prefer to have pace attack and go for four seamers.