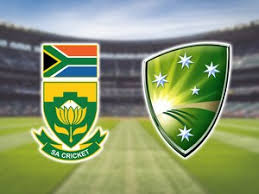 First ODI of the series of three ODI matches between South Africa and Australia is going to be played at the Boland Park, Paarl.

This is going to be thirteenth bilateral series between the teams. South Africa has upper hand, as the team won 6 series and lost 4 with two draw.

When touring South Africa by Australian team, then as well, the host has upper hand. Out of 8 ODI series, the home side won 4 times and the visitors won thrice. The remaining one was resulted into draw.

The teams completed 100 meetings in long limited over format and both the teams won 48 times and achieved tied result thrice, and one was called off without any result.

On the soil of South Africa, the teams faced each other 43 times. Out of them, the South African team won 22 times, and Australian team won 20 times and one was concluded into tie.

The series is the comparison between the forth rank (South Africa) and fifth rank (Australia) team. The host is just a point ahead of the visitors. Overall, the series looks a proper match between the teams, hence a perfect series.

The host could increase the point for the team through series victory only, and stay on the same point in case of the draw, as the result of the series. In case of defeating the series, the host will not only lose the points, but also lose the position from ahead of the visitors to behind the visitors. The visiting team is at the minimum risk and in case of defeating the series, the team will not lose the position, but the points only. In case of series victory, the team will go ahead of the host with increasing points.

Weather forecast of the Paarl shows the weather would be pretty clear throughout the match, and no rain would be expected, as the precipitation percentage would be almost zero. The temperature would be normal and in thirties in light and in twenties in dark. The wind would be pretty normal and would be increased with match progressed.

Particularly, for South Africa, the team won the toss once only out of 6 times, and the teams won the match by largest margin (by runs) on the ground.

The lowest defended total was 204, though, it happened in 2003 World cup against the non test playing nation, Netherland, and the highest successful chase was 250 runs on the venue in 2001.

The average first innings total at the venue is 240, and for the second innings is 172.

The ground witnessed the only tied match, which was the inaugural match at the venue in 1997.

Both the teams never faced each other on the venue. The upcoming encounter will be the first one between the teams as well as for the visitors, as the team never get a chance to play on the venue, not even against any other opponents.

The home side has excellent record at the venue, and won 5 matches out of 6 encounters and lost only once. Moreover, the encounter was so close, that the host lost the match by just a wicket.

The home side could introduce their new player(s) and go with their pacers.

The visitors would prefer to go with three pacers with two spinner, as the team has one medium pace all-rounder, as the sixth bowling option.