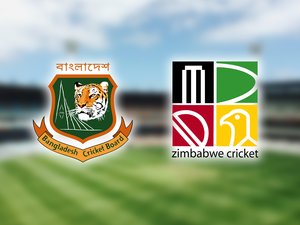 Third and last ODI of the series of three ODI matches between Bangladesh and Zimbabwe is going to be played at the same venue, SICS, Sylhet.

The teams completed 74 meetings in long limited over format and the host won 46 times and the visitors won 28 times.

On the soil of Bangladesh, the teams faced each other 42 times. out of them, the Bangladesh team won 32 times, and Zimbabwean team won just 10 times.

The series is the comparison between the seventh rank (Bangladesh) and twelfth rank (Zimbabwe) team. The host is way ahead of the visitors in point table.

Weather forecast of the Sylhet shows the isolated thunder storm in the morning, but the match is going to start in afternoon, so very less chance of storm would hit the match. But the weather would be cloudy throughout the match. Though, the precipitation percentage would be decreased progressively, so the expectation of rain would interrupt the match would be very less. The temperature would be normal and in twenties. The wind would be pretty low as well.

Particularly, for Bangladesh, the team won the toss as many time as the team played the matches at the venue.

The first batting team won the matches twice, and once for the team, who batted second.

The lowest defended total was 322, and the highest successful chase was 199 runs on the venue.

The average first innings total at the venue is 280, and for the second innings is 224.

Both the teams faced each other on the venue, just twice in the recent encounters, in ongoing series. The visitors are still looking for the first ever win.

The home side has an excellent record at the venue, and undefeated at the ground, yet.

The home side would go couple of changes to give chance to the bench strength. M. Naim would get place in place of L. Das to get rest and same for the A. Hossain in place of M. Hasan.

The visitors would prefer to have couple of changes to include C. Ervine and C. Mpofu.