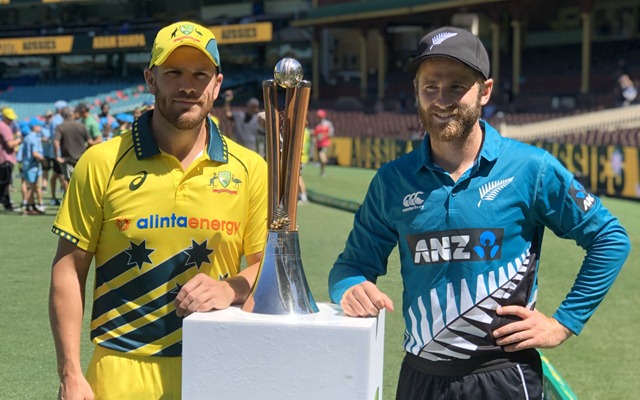 First ODI of the series of three ODI matches between Australia and New Zealand is going to be played at the Sydney Cricket Ground (SCG), Sydney on March 13th 2020.

This is going to be eighteenth bilateral series between the teams. Australia has upper hand, as the team won 9 series and lost 4, whereas, four were concluded into draw.

When touring Australia by New Zealand team, then as well, the host has upper hand. Out of 5 ODI bilateral series, the home side won twice and the visitors won just once, which was in 1982-83, 38 years back, and two was resulted into draw.

The teams completed 157 meetings in long limited over format. The host won 91 times, whereas opponent won just 39 times with 7 games without any result.

On the soil of Australia, the teams faced each other 64 times. out of them, the Australian team won 42 times, and New Zealand team won just 18 times with 4 games without any result.

The series is the comparison between the third rank (New Zealand) and fifth rank (Australia) team. The host is eight points behind the visitors.

The visiting team is at the similar situation as the host in terms of points, but if the team will lose the series without any win, then the team will drop down from the current ranking. On the other hand, in terms of three-nil series win, the team will gain one position and will reach on the second rank, just ahead of team India.

The first ODI result will go in favor of the home side, the home side will gain a point, and the visitors will lose one. And, vice-versa in case of opposite result. The teams will stay on their current positions.

Weather forecast of the Sydney shows the weather would be pretty clear throughout the match. No rain would be expected, as the precipitation percentage would be almost zero. The temperature would be normal and in twenties. The wind would be little high around 20km/h.

Teams preferred to bat first after winning the toss, which happened 104 times out of 156, and the selection favored the teams, as the teams won 58 times after selecting the first batting but lost 42 times, as well, with 4 games without any result. On the other hand, the teams who chose to field first, after winning the toss, won the matches only 20 times and lost 29 times with 3 matches without any result. Overall, 78 times the teams, won the toss, won the matches and lost 71 times.

Particularly, for Australia, the team won the toss 61 times out of 131 times, and the teams won 43 times and lost just 15 times with 3 matches without any result.

Both the teams faced each other 22 times on the venue. Out of those 22 times, host won 14 times and visitors won 6 times, whereas two encounters were concluded without any result. The visiting team played other 7 games with different opponents and the team won just once and lost 5 times with 1 without any result. Overall, the visiting team played 29 games on the venue and won just 7 times. Last time, the team won in 2002, 18 years back, against the host.

The home side has excellent record at the venue, and won 86 matches out of 131 encounters and lost only 39 times with 6 without any result.

The home side would go with the pacers on the batting friendly pitch.

The visitors would like to go with pacers with one spinner combination, as the team has couple medium pace all-rounders, as bowling options.